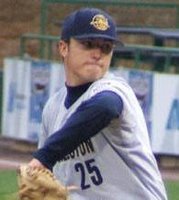 Games without a HR

Tuesday, March 14, 2006
Looking ahead to the draft
"The draft has never been anything but a fucking crapshoot. We take fifty guys and celebrate if two make it. In what other business is two for fifty a success? If we were in the stockmarket, we'd all be broke."

It's hard not appreciate the brutal honesty of that quote from Moneyball by A's GM Billy Beane. The draft is a little more than 3 months away, but it's never to early to start talking about it, especially because the big shots in the front office have been seriously scouting players for a few months now, after years of following their progress.

The MLB draft is unlike the more hyped NFL and NBA drafts; there's no TV broadcast (it's a league-wide conference call that is available on audio via MLB.com), no one selects a player expecting an immediate impact (players like the 2005 version of Huston Street come along once every 10 years or so), and there's no trading of picks (thankfully, you could imagine were the Yanks would be if they were able to trade away first rounders these past few years).

The Yankees haven't always hit the nail on the head when it comes to their first selection in the draft; the only player to have an above-average major league career expected of a high draft choice in the last 15 years or so is Derek Jeter (Eric Milton is an average pitcher, and save judgment for the recent first rounders, Eric Duncan and Phil Hughes). With the exception of Jeter, the homegrown core of the late-90s dynasty teams were either international signees (Bernie Williams, Mariano Rivera, Orlando Hernandez) or mid-to-late round draft choices (Andy Pettitte, 22nd round; Jorge Posada, 24th), not exactly a picture perfect blueprint. But hey, it worked.

The 2005 draft was the strongest the Yankees have had in several years, possibly the best since the 1996 draft that netted the aforementioned Eric Milton (traded for Chuck Knoblauch), Nick Johnson (traded for Javy Vazquez), and Zach Day (traded for David Justice). They landed two first round talents in CJ Henry and Austin Jackson (Jackson dropped to the 8th round because of a basketball scholarship to Georgia Tech, but the Yankees gambled and it paid off), and loaded up on college pitchers with their next few picks. They also picked up some potential sleepers in the later rounds with Alan Horne (11th round) and Josh Schmidt (15th round).

The 2006 draft class is widely considered the weakest since the infamous 2000 draft, where only 12 of the first 100 selections have made it to the show and stayed there. Baseball America's early draft preview cites little high ceiling talent accompanied by depth in rounds 2 through 6. No one will likely touch the most talented player available (Luke Hochevar) given the debacle surrounding his contract negotiations after last year's draft.

The Yankees' needs are apparent: they desperately need a long-term successor for Jorge Posada, depth on the left-side of the infield (it's thin beyond CJ Henry, Eduardo Nunez and Marcos Vechionacci), and as always, pitching. In reality, the Yanks should have looked for a solution at catcher about 2 years ago, but I guess they were hoping 2000 first rounder David Parrish would still pan out. As far as backstops go, these guys are two of the best the 2006 draft has to offer (all stats are as of March 12th):

Chad Tracy, C, Pepperdine: No relation to the Diamondback's third baseman of the same name, Tracy can hit. Alot. More than 35% of his hits for the Waves have gone for extra bases, and his career line is .341-.391-.555-.946. Impressive considering he's a catcher and spends his time in full catching gear baking under the Malibu sun. He strikes out a bit too much, but is improving in that regard (30-28 K/BB in 2005, 9-8 in 2006). Baseball America rated him as the 25th best college prospect before the season.

Mike Ambort, C, Lamar: The local kid out of Rockville Centre, NY was a pre-season first team All-American heading into 2006. He mashes, clubbing 27 HR and and 29 doubles in 117 college games (that works out to 37 HR and 40 doubles over 162 games), producing a career line of .309-.384-.559-.943. Baseball America's 47th best preseason college prospect has been stuck in part-time duty thanks to an injury he suffered in the Cape Cod League last July. If he's unable to get regular ABs this season, he'll drop in the draft, meaning he may fall into the Yankees lap.

Despite their gaudy numbers, neither Tracy nor Ambort were that highly touted before the season, and could have been had with a third round pick, possibly even a fourth rounder. Tracy is still in that draft position, but Ambort is plummeting down draft boards, possibly even as far down as the 20th round. The one thing not in short supply in this year's draft is pitching, especially righthanded pitching (just like every year). One of these 4 guys would make a solid if not spectacular first round selection at number 21:

Joba Chamberlain, RHP, Nebraska: It's hard not to like the 6'3", 225 lb member of the Winnebago tribe, if not for his name and appropriate physique, then for his stuff and "give me the damn ball" mentality. Listed as the 12th best college player available in the draft by Baseball America prior to the start of the season, Chamberlain dominates opposing batters with a mid-90s fastball and knee-buckling curveball. Chamberlain is 2-1 with a 1.29 ERA for the Huskers, allowing only 11 hits in 21 innings while striking out 28 this season.

Ian Kennedy, RHP, USC: The pint-sized (5'11", 185 lbs) Trojan ace is a control artist, sporting a 372-90 K/BB ratio in 254 college innings. Baseball America ranked him as the 5th best college player available prior to the season, and although his stuff is barely above average (89-91 mph fastball, decent changeup and curveball) he's a winner (22-8 at USC) that'll give you innings (6.9 IP per start in 2006). He's widely considered by scouts to be the safest bet amongst pitchers in the draft.

Brandon Morrow, RHP, Cal: Heading into the season, Baseball America ranked Morrow the 9th best college prospect, but has seen his stock grow exponentially this season. After serving primarily as a reliever in his first to years at Berkeley, Morrow is dominating in his newfound starter role. He's holding batters to a .195 BAA and striking out 9.62 per 9 innings this season with his filthy stuff . His drawback is his control, as he's walked more than 6 batters per 9 innings over his career, uncorking 8 wild pitches in 88.1 IP.

Dellin Betances, RHP, Grand Street High: The New York City native is a giant on the hill, measuring in at 6'9" and 205 lbs (he's only 18, so he's still growing). Baseball America lists him as the 4th best high school player available in the the upcoming draft. He uses his height to his advantage, throwing on an extreme downhill plane with his 92-93 mph fastball, decent changeup and hammer 12-to-6 curveball. He has good control for a kid his size, but keeping his mechanics in check and maintaining a sound delivery will always be a challenge. He's a quiet kid with an "aw shucks" personality, but still commands respect.

Based on the way the draft has panned out in recent years, there's a good chance at least one of those 4 guys will drop to the Yankees at 21. Players, especially top tier pitchers (go figure), drop in the draft all the time due to a variety of reasons: signability, college commitments, injury questions, etc. The best pitcher in 2005 lasted until pick number 40 (the aforementioned Luke Hochevar), and even the greatest college pitcher ever, Mark Prior, "dropped" to number 2 overall. It's possible, if not likely that one of Chamberlain, Kennedy, Morrow or Betances will be available when the Yankees turn comes up. Personally, I'm hoping for Betances or Chamberlain, in that order.

Keep in mind the draft is still a ways away, and alot will likely change. I'm sure I've revisit this topic several times before then.
Written at 11:06 AM by Mike A.
2 comments
2 Comments:

Anonymous said...
Is there any chance Hochevar is actually still around in the 15/16th round? He was considered a top draft pick last year. I'd take him in the 2nd/3rd round if he were still there.

Either way, I bet he'll sign with the Dodgers before anyone else gets a chance at him.
10:09 PM

Mike A said...
The Dodgers have already broken off talks with Hochevar so he's going back into the draft.

There are serious questions about his makeup now, plus he's not playing ball at all this year, not even in an indy league.

I know Jim Callis has said he thinks Hochevar will drop into the 20-30 round range, and he may know more about this stuff than anyone on the planet.

2nd/3rd round may be a bit of a reach, especially if he could be had much later.
1:26 PM
Post a Comment
<< Home
All-Star Ballot
Vote for your favorite Yankees on this year's All-Star Ballot! 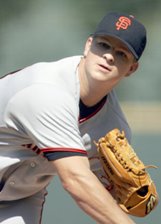 Some rights of this page's plain text stuffs are reserved for the author.
The Template is generated via PsycHo and is Licensed.